Every month, BeAngels highlights an entrepreneur member who has become a business angel. The second in this profile series is Benjamin Tillier, CEO of Acar'Up Consumer Health. The company develops and markets a range of solutions for the diagnosis, prevention and treatment of dust mite allergy. Benjamin agreed to tell us about his early days as an entrepreneur and why he became a member of BeAngels.

What made you decide to become an entrepreneur?

I've always wanted to do this! I have always dreamed of being my own boss.

My journey started in quite a traditional way: I studied civil engineering, specialising in computer science. Not that I was a computer geek, far from it. But I didn't know what else to do. And while I was still in my final year of university, I was approached by the big consulting companies. It was rewarding as a student to receive several interesting job offers in February, even though I wouldn’t graduate until the June. So that's how I fell into the trap of the multinational consultancy firms, which is hard to resist, of course.

And once you get caught up in it, the years go by very quickly. And the more time passes, the more you develop and the more comfortable the situation becomes. I had a good salary, nice benefits, important job titles and big responsibilities, but I felt a bit trapped in the system. Especially as a young father. Then one day, the chance to spread my wings presented itself. Despite all the perks, I decided to go for it and take the leap.

Don’t get me wrong, I had a great time in consultancy, I had great colleagues and I learned a lot. And I may go back one day, by the way. But at that moment, I felt it was time for me to try something different.

Can you tell us more about this first entrepreneurial adventure?

To start with I joined a friend of my brother's who had a growing SME in the paramedical field, as an independent consultant. In addition to my IT skills, which convinced her at the outset, it was my knowledge of the workings of large companies, which I’d acquired in consultancy, that was most helpful to the business. I spent four years working with her, restructuring her company extensively to make it more efficient and profitable, and also more scalable. I was constantly travelling between Germany, Flanders and the Netherlands, where the main entities of the company were based.

I then moved up the entrepreneurial ladder, leaving my previous position to set up my own company in the self-care sector. It was a distribution company for health solutions and products based in Luxembourg, where I live. I spent six years at the helm of this company, which I built from scratch. I did almost everything myself at the beginning. Over the years I gradually surrounded myself with a team of employees. I had a wonderful time. There were lots of ups and downs, moments of euphoria and extreme stress. It was intense, but I learned so much. I never sought external funding for my business. In hindsight, this was a mistake. I would have used business angels if I had known what they were at the time!

While trying to broaden the range of products that we distributed, I came into contact with the Brussels-based company Acar'Up, which develops and markets allergy products. Although my contact at Acar'Up and I got on very well, our discussion did not lead to a collaboration between our companies. Our business models were too different. However six months later, he called me out of the blue to let me know that Acar'Up was looking for a new CEO and that he had thought of me.

Out of curiosity, I went to meet the Board of Directors in Brussels. We hit it off and a few days later, after weighing up the pros and cons, I accepted their offer. I knew that by doing this I would have to reluctantly leave my own business behind. But I was looking forward to a new challenge, especially as I was going to be surrounded by a Board of Directors and public and private investment funds, which was a first for me. So for several years now I have been the CEO of this pharmaceutical start-up, and also the Chairman of its Board of Directors.

« I never sought external funding for my business. In hindsight, this was a mistake. I would have used business angels if I had known what they were at the time! » Benjamin Tillier

How did you become a business angel?

During my numerous exchanges with investors in the context of Acar'Up's development, I became interested in moving to the other side and becoming an investor myself. They told me about BeAngels, and I ended up joining an investment group (BAC)[1]. The concept appealed to me straight away. I met some very interesting people while learning about investing in start-ups.

As well as the financial investment and the potential return, I find that the business angel activity is extremely enriching on a personal level. When you have built up some professional experience in your life, as I am beginning to do, it’s very enjoyable and rewarding to share your knowledge with entrepreneurs who are just launching their start-up. It is also an opportunity to discover the latest innovations and gems of tomorrow.

[1] BAC is an ideal way to learn about investing in start-ups. You join a group of 20 investors and are supervised by coaches. They will help you analyse the different start-up projects and make your first investments. In the course of a year, you invest €15K in three different projects. This is our most successful formula for new members who have a minimum amount of time to give.

« As well as the financial investment and the potential return, I find that the business angel activity is extremely enriching on a personal level. » Benjamin Tillier

What do you recall from your experience with this small group of investors?

I particularly liked the diversity within our group (BAC). Members came from completely different backgrounds, were of different ages and had different levels of cultural heritage. For example, we had a surgeon in the group. Without him we would never have invested in a medical project, which was great, because he was able to share his expertise and knowledge with the rest of the group.

Very often one or two people in the group will take the lead in analysing the project. Usually those who have the most knowledge about the subject of the project. This creates a lot of debate, as investment decisions are made in a collaborative way. Gradually you get to know the other members of the group and some even become friends. It's a real adventure you go on together!

Have you set yourself any goals as a business angel?

No, I let myself go with the flow and be carried along by the adventure. I have not set myself any profitability targets. I prefer to think that this money could be completely lost, even if it will never be wasted in terms of the personal experience. This will be the cost of the experience. Although, I say this because I feel that I am still in the learning phase. I only invest small amounts at the moment.

What is the advantage of having a business angel with entrepreneurial experience by your side?

When I attended the entrepreneurs' pitches, I realised that for a number of start-ups, with my entrepreneurial experience I could identify with the project to the point of visualising exactly how I would run the business if I were in their shoes. So if I think I could get the start-up off the ground myself, then I'm very tempted to invest and get involved. And in these cases I believe that my advice could have real added value.

Also, sometimes I believe in the solution that the start-up has developed, but not in its business model. In my personal experience, there would be a greater chance of success if the market was approached in a different way (go to market strategy). I remember having a long discussion of this type one day with an entrepreneur after a pitch. And I noticed that he took it on board afterwards. It is obviously very enriching for project leaders to have their ideas challenged by business angels. It is quite common for us to open their eyes to new perspectives, which is rewarding for us.

In any case, the fact that I have diversified my experience and got my hands dirty myself, and experienced failures as well, leads me to think differently to those who have never set up a business themselves or who have always worked in multinationals for example.

« So if I think I could get the start-up off the ground myself, then I'm very tempted to invest and get involved. » Benjamin Tillier

As well as becoming a member of BeAngels you also became Chapter Lead of BeAngels Luxembourg. Can you tell us more?

Again this is something that I had absolutely not planned! The discussions started when I mentioned to Claire Munck, BeAngels CEO, that I loved my experience with the network, but that the long distances weren’t great for me. As most BeAngels events are organised in the Brussels region and I live in Luxembourg, I had to drive at least 200 km to attend them, which was not always compatible with my schedule. That's when Claire suggested I turn this problem into an opportunity by helping BeAngels set up a branch in Luxembourg.

After taking some time to think it over, I agreed to take on the role of BeAngels Luxembourg Chapter Lead, alongside my other activities.

The first contacts I made were very positive and then things moved quickly from there. Less than three months after opening, the Luxembourg branch of BeAngels already had dozens of new members, had organised its own monthly events, launched its first BAC and organised its first BeAngels Academy cycle in the Grand Duchy. It’s still going from strength to strength, welcoming new members every week, while gradually integrating into the Luxembourg start-up ecosystem thanks to the various contacts we’ve made with public and private players in the sector.

I am very happy to have embarked on this adventure, which gives me opportunities to meet many interesting people in Luxembourg and allows me to attend BeAngels' pitches in a friendly atmosphere only a few minutes away from home. 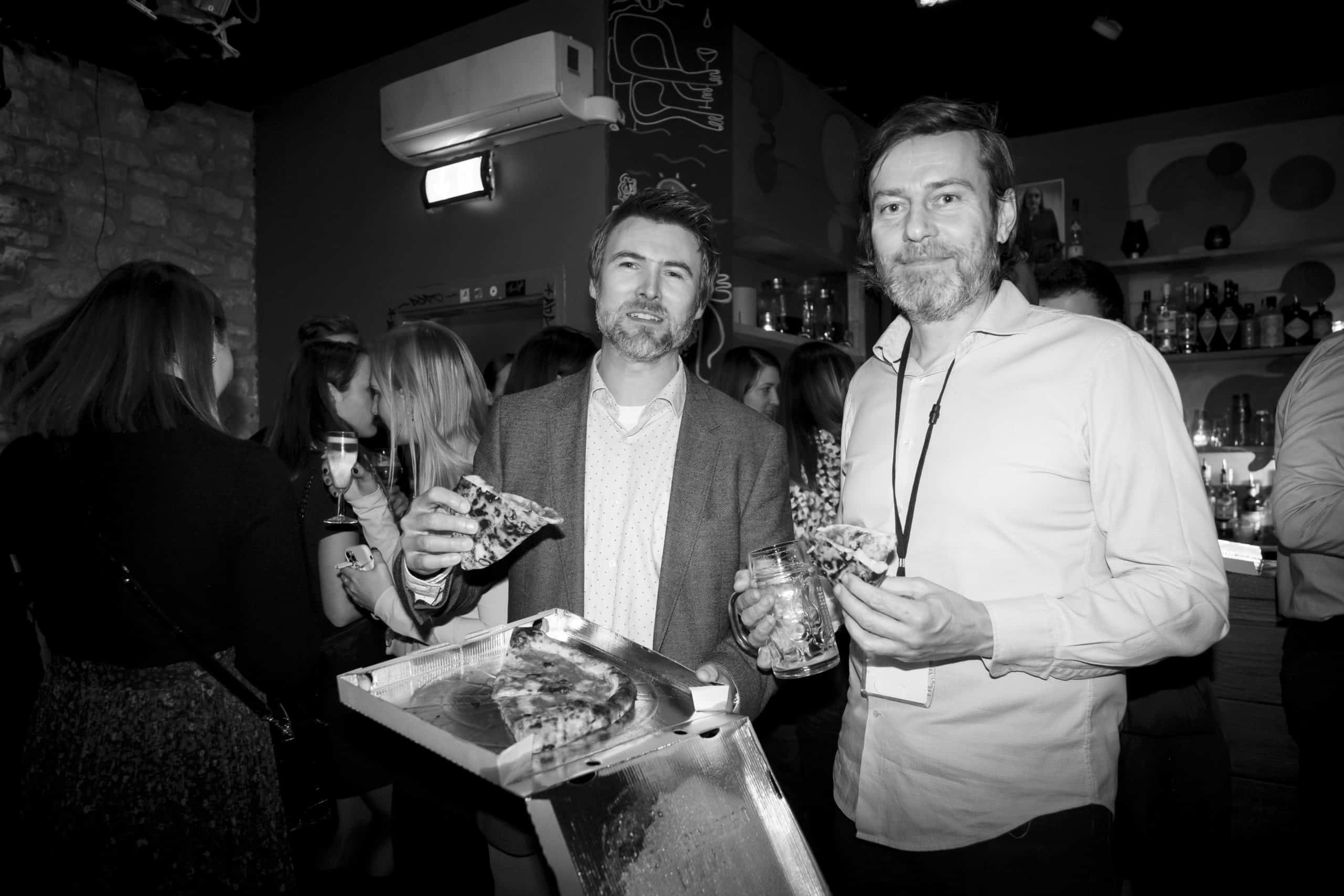